Here comes the last part of the Galileo Module: the relativity of values.

The aim of this module is to understand that no value is absolute, and that all values are relative to one another.

First I will study the price of gold, which we all now for sure is one very stable reference, right?

Let’s have a look at this very stable value:

Hmm, it doesn’t look as stable as we thought. Someone in the US who would buy gold in early 1980 thinking that this thing is definitely going up would absolutely be astounded to see he has lost half of the value 2 years later compared to the USD. Of course, the one who bought gold in 1975 with USD would probably have been very happy to sell his gold to get back some USD in 2012 (x10!).

But enough of the Gold. Silver must be probably better than gold, and reassure us on the fact that those metals are very stable in value:

Oh, it seems silver is even more unstable than gold compared to the USD. What about this rare metal called Palladium?

Well, it’s not so different. Okay, maybe it’s the dollar that is not stable?

Let’s have a look at Holly Gold compared to different currencies:

What a Christmas Tree! This is total nonsense! Especially in July 2018, are we supposed to think that gold is “going up” or “going down”??? 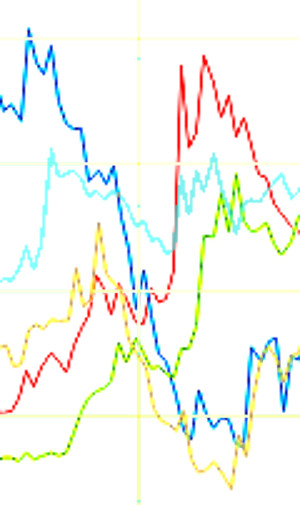 The truth is that nothing is going up or down by itself. Values are always “going up” and “going down” compared to another value. So these variations are totally normal, as nothing has such a thing as “intrinsic value”. Objects have “properties” that are then valued by humans to be “better”, “similar”, “worse”, than other properties of other objects. Gold is rarer than silver? Maybe that’s a reason why it’s valued more. But isn’t it also “better” because it doesn’t get oxydized while silver does? On the other hand, gold is “soft” and can barely be used in its pure state. Silver, on the other hand, is a hard metal, isn’t it better then? See, there are many things that drive the “value” in our minds of one thing, even if it seems simple. But it is always “relative to something else”. A hunter-gatherer tribe will have no business with you if you try to give them a golden bar, they can’t eat it! But for sure, they absolutely could use that big axe you have in your hand to hunt game, so they will value that axe much more than your gold bar.

Next, let’s see the value of gold compared to something that is a worldwide reference: the SDR (code XDR), Special Drawing Rights. Never heard about it? It’s a world currency, a basket of different currencies (USD, EUR, GBP, JPY, and more recently CNY). Here is the chart:

Unsurprisingly, it bears a resemblance with the charts involving the USD and EUR. But still not stable, which we know now is quite normal.

We all know (especially French people) that the prices of houses and flats in Paris is surging for the last decades. Unfortunately, it may be true when counting in units of euros, but if we compare the prices to the total number of euros in circulation, let’s see what happens: 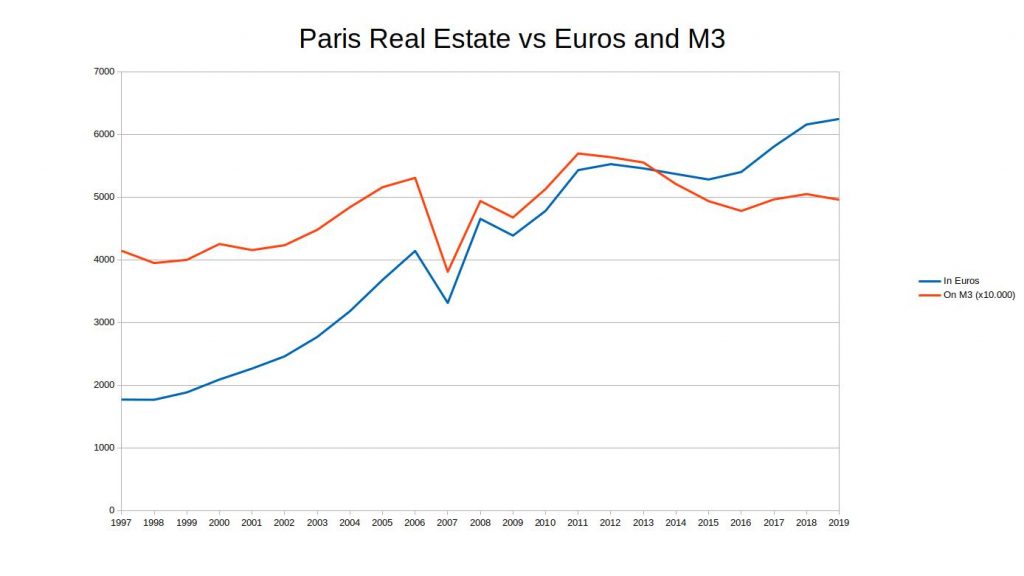 In fact, the price of a Parisian flat seems to be quite stable compared to M3, which is the total amount of euros in circulation. Surprisingly enough, it is even plummeting since 2011!

Last but not least, let’s compare the price of a Parisian flat if we were to buy it with Gold: 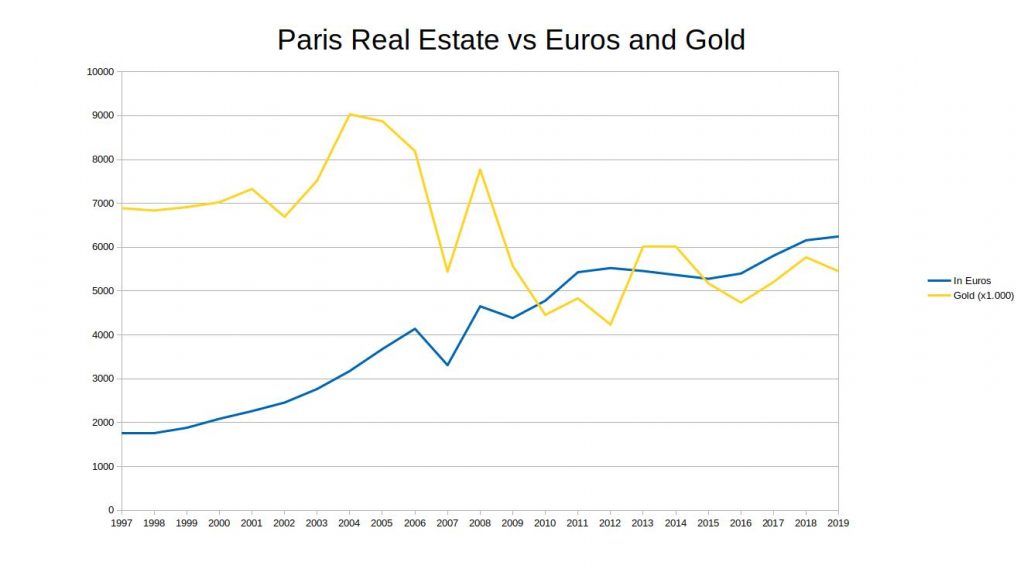 That’s not cool, the price of a Parisian flat lost almost 20% since the 1990s compared to gold. Surprised? I’m not.

Conclusion on the Galileo Module

Nothing is absolute. Everything is relative. In other words, every “value” you measure is actually measured “in a specific frame of reference”.

In everyday life, we tend to forget that fact about some values and tend to allow ourselves to think that “things have intrinsic value”. Objects and services never have an intrinsic value.

On the other hand, in everyday life, we are also more precise when it comes to other things. What if I tell you that my house is 50 away? 50 what? Meters? Kilometers? Yards? Nautical Miles? Minutes if you walk fast? We always use a “unit”, which is in fact a frame of reference.

We should not forget that every single value is, in itself, a frame of reference that can be used to compare it to other values.

Depending on the frame of reference we choose, we can conclude on very different results, as we have seen when we discussed monetary accounts in “absolute monetary units” and in “relative UD”.