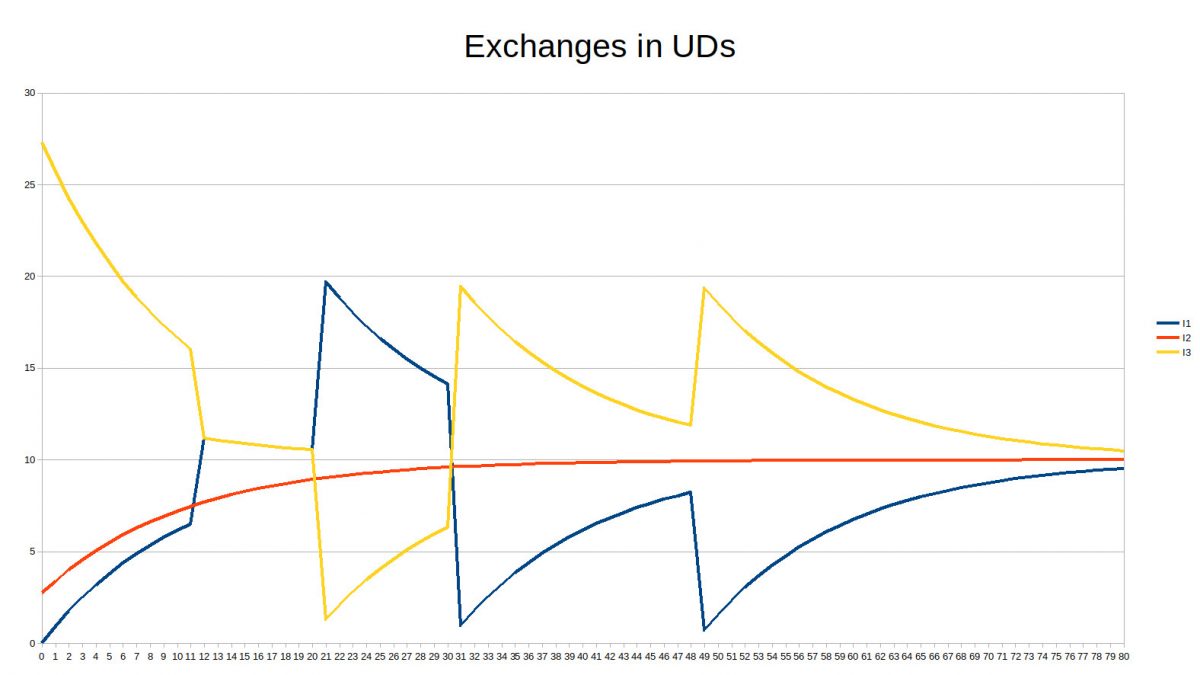 In Part 1, we have studied how accounts of 3 individuals evolve in time, without considering any exchanges at all. But a currency without exchanges is a dead one.

You can download the spreadsheet for this part here.

Note that “not considering exchanges” doesn’t necessarily mean that the individuals don’t exchange at all, it only means that they have zero-sum exchanges. For instance, let’s consider that we have this situation every day:

They all exchange but numerically it looks exactly as if they didn’t exchange at all. Besides, we can note that those exchanges are very big compared to monetary creation: the GDP of this population is 300 UD per day! Yet everything looks as if they weren’t exchanging at all when considering the totals.

We see here the importance of considering economic flux and monetary creation separately.

(b) Simulate exchanges between I1 and I3

In this part, we will begin to examine what happens when the individuals perform non balanced monetary exchanges.

Some unbalanced exchanges in the absolute scale

So let’s consider that our 3 individuals perform mostly balanced exchanges in their lives, but that I1 and I3 do some unbalanced exchanges from time to time. Following is the relevant years when they exchange extra stuff along with the balance of their accounts at these years after the exchange:

Unfortunately, the absolute scale doesn’t allow us to really see anything because of the exponential growth. Therefore we can switch to a logarithmic scale which allows to “flatten” things a little: 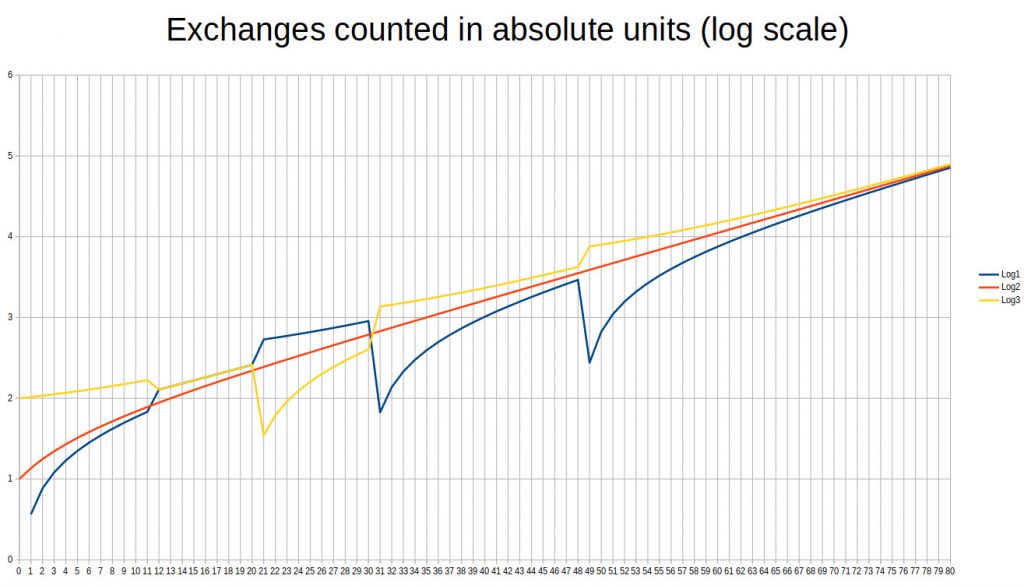 All accounts always converge toward the same value and that most exchanges are “forgotten” after a few decades, even the biggest ones.

In the relative scale

Now let’s switch to the relative scale and compute the same table of the exchanges expressed in UDs instead of absolute units:

At first sight, all accounts are roughly revolving around a mean value of 10 and thus the exchanges are expressed in values that don’t grow over time, unlike in the absolute scale. Let’s have a look at the chart of the exchanges: 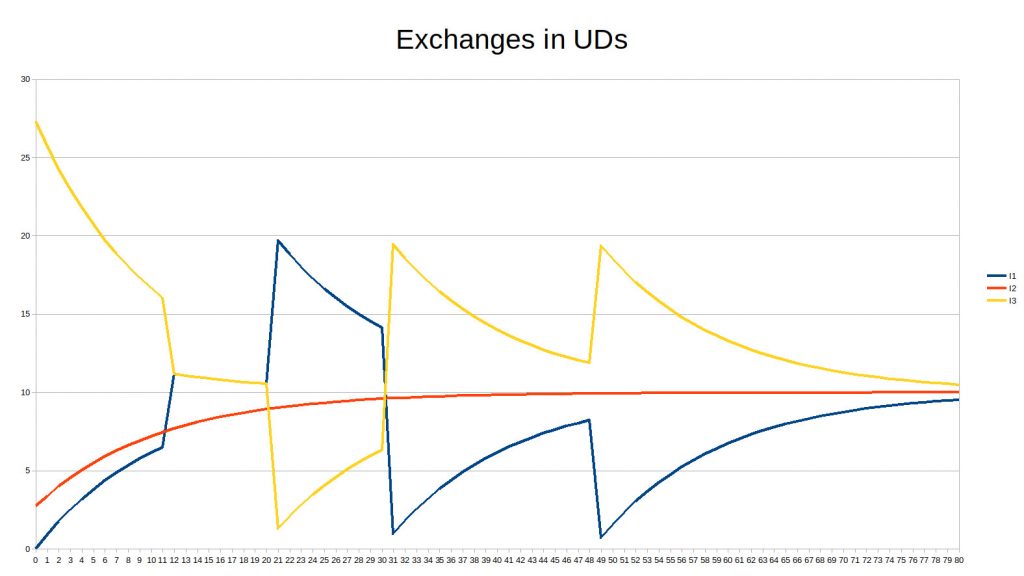 It is interesting to note that you can even spend almost the average of all accounts (here 10) twice in a lifetime and still end your life with a full account. Even if you “rob” someone of their money twice in your life, you also end up with an account that is not significantly fuller than other accounts.

Does this mean that one cannot get richer in a Libre currency, whatever you do? That is not entirely true. For instance, suppose that I1 is a very lazy person, or a person who produces Ğvalues which are not recognized by his peers during his lifetime as “values” thus not very well monetized, let’s call him Vincent (Van Gogh). In the meantime, I2 is a “regular” citizen who exchanges in a balanced way, let’s call him (Average) Joe. Finally, I3 is an extremely focused person whose goal in life is to produce values that are recognized by his peers, let’s call him Bill (Gates).

Let’s assume that, through his dedicated and intensive work, Bill manages to “catch” at time t 90% of a UD(t-1) per day from Vincent and 10% of a UD(t-1) per day from Joe. We don’t actually know what you can buy with a UD and these are only totals – maybe Vincent gives 50 UDs to Bill and gets back 49.1 UDs. One thing we know for sure is that Vincent cannot spend more than a UD daily on the long run – he would run out of money! So here we go, every day, we have:

The corresponding chart in the relative scale looks like this: 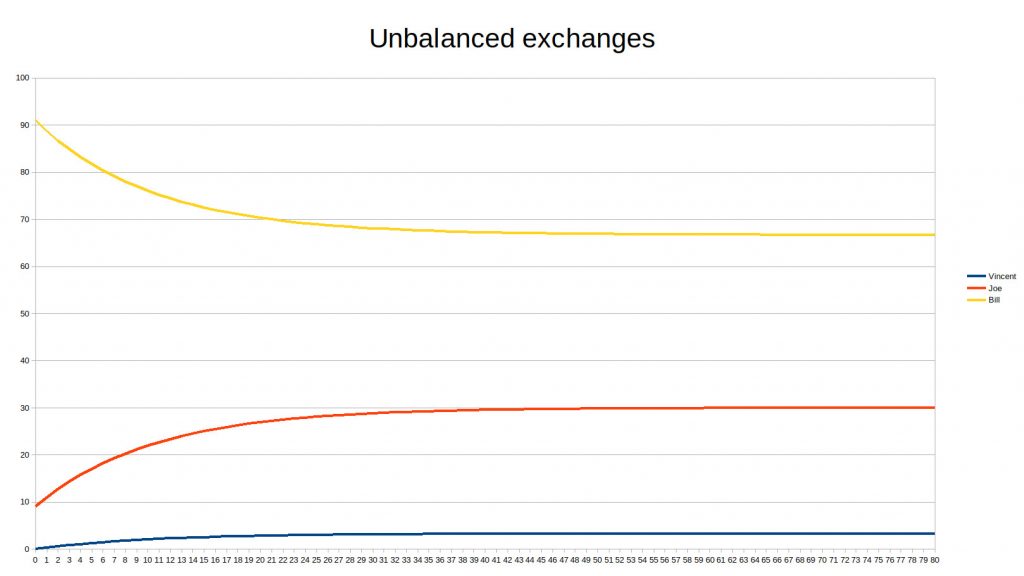 It is now obvious that Bill, who takes from his father not only the monetary heritage but also the trading drive, has an account that tends toward 67 UDs, while Vincent, who not only didn’t have anything at birth but who also chose to produce not strongly monetized values, has an account that tends toward 3.3 UDs. Consequently, we have a whooping ratio of 30 between Vincent and Bill’s accounts.

Who said you can’t get rich in Libre money?

Well, you can get “richer than the others” but the main difference with other types of money is that you can’t get “insanely richer” than the others.

I have told on purpose a story where things seems quite “fair”. However, if you change the story, you may get something that could be definitely considered abnormal with exactly the same numerical values.

Alternatively, imagine that Vincent is not a painter, he’s actually a very hard working fellow in a factory owned by Bill. Vincent’s salary is ridiculous compared to the profits Bill gets from selling the objects made by his factory and from Vincent’s hard work. Besides, Bill is also the owner of the apartment where Vincent lives, so Vincent must pay him a rent. The story might end up like this: Bill is an extremely lazy guy who owns many things he inherited from his parents and live off of them, while Vincent is an extremely hard worker who kills himself trying to earn his life through 10+ working hours a days in a factory, but because he’s paid very little and has to pay for his rent, he ends up giving away 90% of his UD every day to Bill.

Obviously, the numbers are exactly the same, but the situation is totally different. Definitely, a Libre money system cannot fix all of society’s problems. However, because with Libre money we know how money is created and where it goes and the reasons why it goes there, then many schemes will be exposed while they remain hidden in the system’s complexity today. Because of that complexity and obscurity, we can always end up blaming the wrong people and the wrong things for the wrong reasons.

Finally, why would Vincent go enslave himself in a factory 10+ hours a day if he can actually live exactly the same life when painting at home? As he knows he has his daily UD, it will get harder to enslave him.