Following up with the pictures of the moon taken with a Nikon camera on a 114mm Newtonian telescope, I have recently bought a quite cheap CCD camera. There are a few advantages and a few drawbacks.

Here are the qualities of the CCD:

very easy to mount directly on the telescope

directly exposed to the object without any extra lenses

no possibility of playing with contrast/exposure time since it is a cheap camera, you have to rely on the automatic settings, some more expensive ones do have these kinds of settings, but that’s definitely another budget

And here are the qualities of a full camera:

having to go through at least an eyepiece and a refractor can create a lot of chromatic aberrations and distortions, as seen on the pictures in that post (look out for a blue halo around the moon or around the craters, for instance) compared to the ones in this current post.

the weight of the camera can be an extra load on the telescope’s mount, especially if the mount is already reaching its limits with the tube on its own

So finally, here are two sample pictures taken on the same telescope: 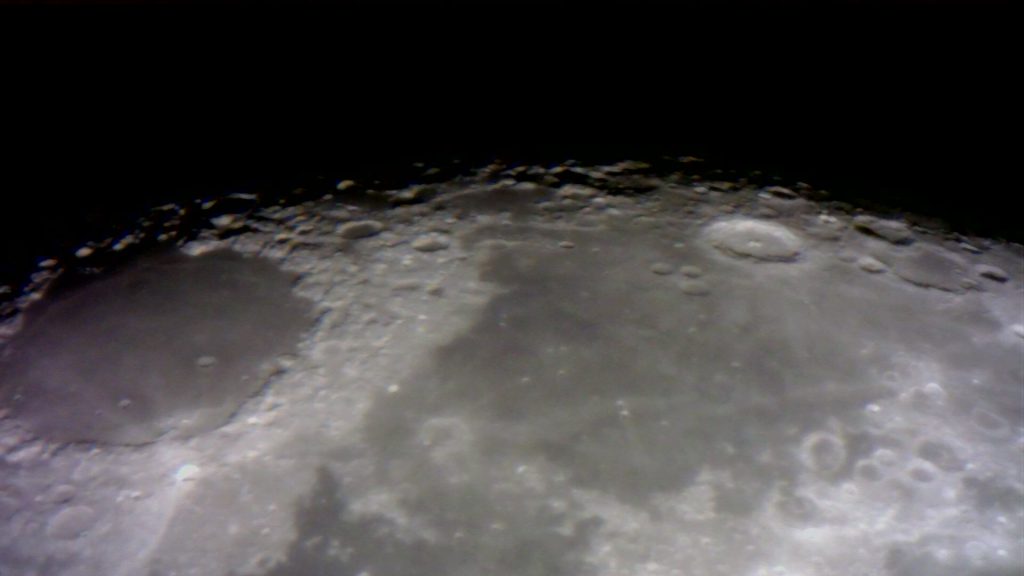 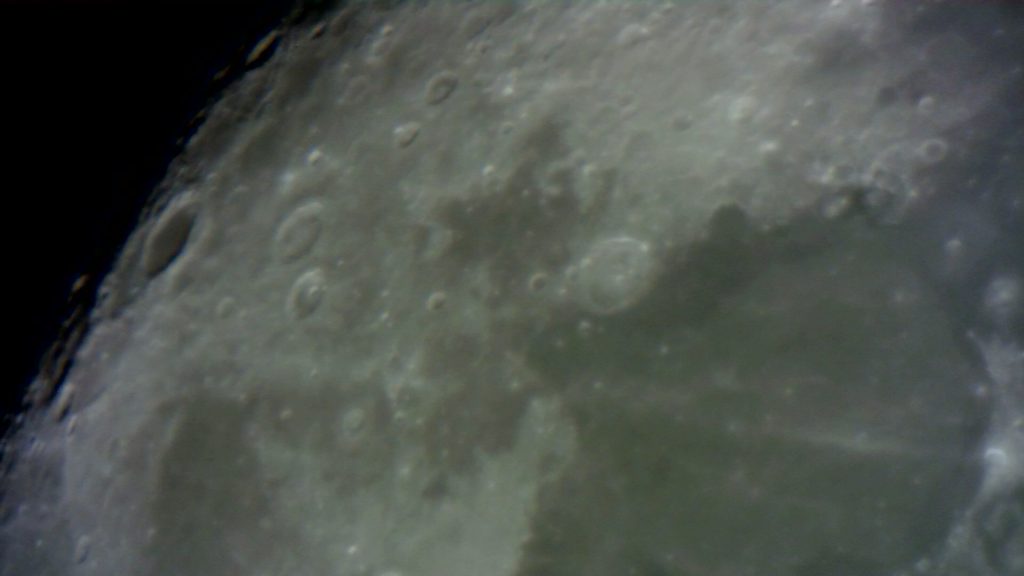 Note that those pictures were taken from my balcony, right in the middle of the city, and all astronomers know that this is the worst setting to do any kind of viewing and especially any kind of photography.  The thing is that you won’t realize what this really means until you see this video (2Mb):

See the wobbling? That’s the air heated unevenly that moves around. It somehow totally reminds me of what you see when you look at the bottom of a very very still pool filled with water, look at this one: 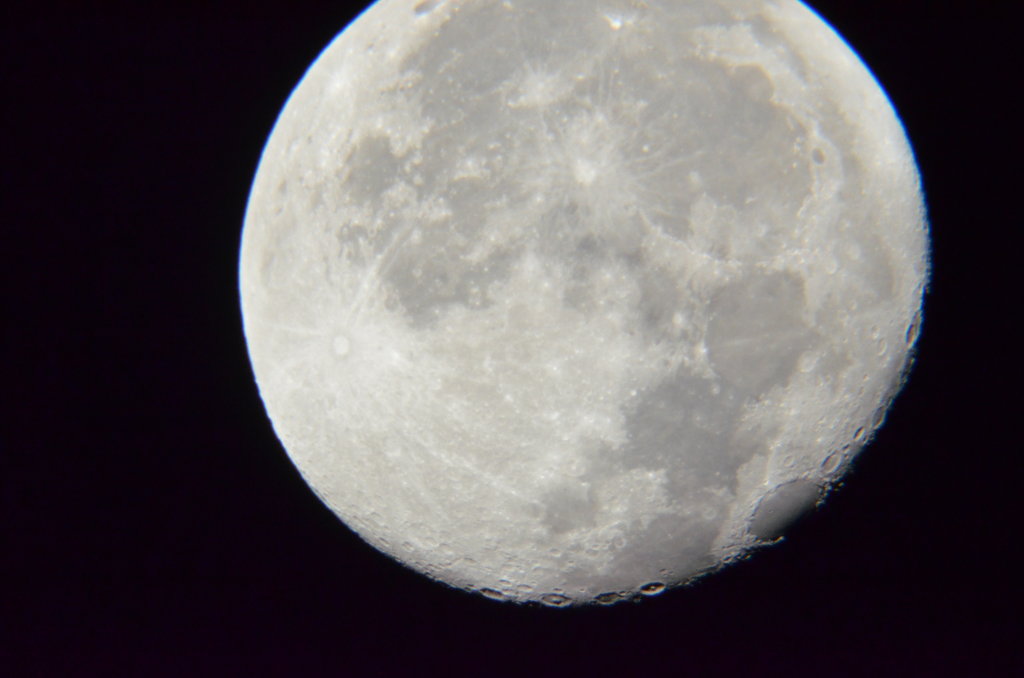 The Moon is back with its normal non-eclipsoid figure. 😀

Here is a picture taken with a Nikon D5100 mounted with a simple Barlow on a Celestron 115/910. I’ve had both the telescope and the camera for a long time now, but never took the next step of taking pictures. Thanks to the recently acquired barlow, this is a dream come true.

This is taken from a balcony in the middle of a big city, not exactly your ideal conditions for taking pictures of the sky especially during a hot summer with lots of temperature differences, but the results are still quite good and I have not applied any software fix on them. Exposure: 1/200 s, sensitivity 1000 ISO. Enjoy! 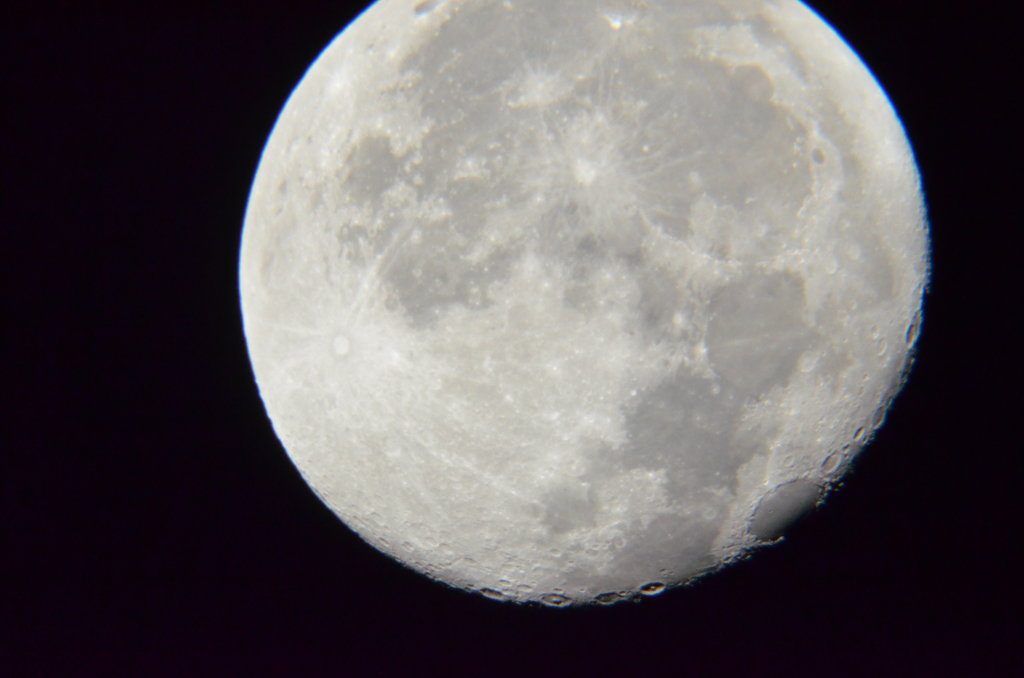 Note the difference in chromatic aberrations depending on the location of the details mostly due to the barlow lens, the following animation shows the same details taken in the center of the picture compared to the edge (1/100 s, 400 ISO): 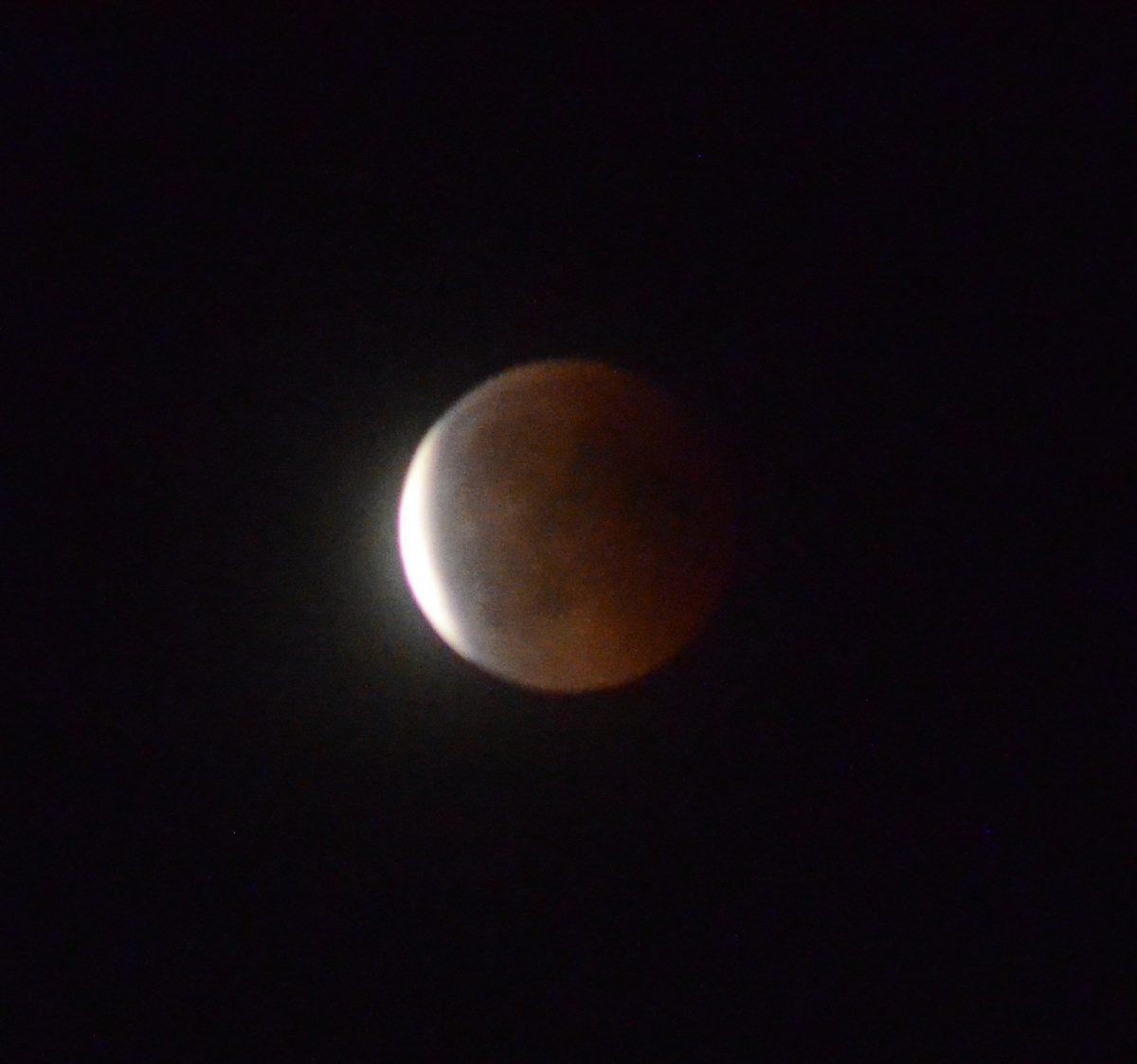 The sky was kind enough to let us see the moon eclipse yesterday for a short time, as it was quite cloudy. A very nice experience. 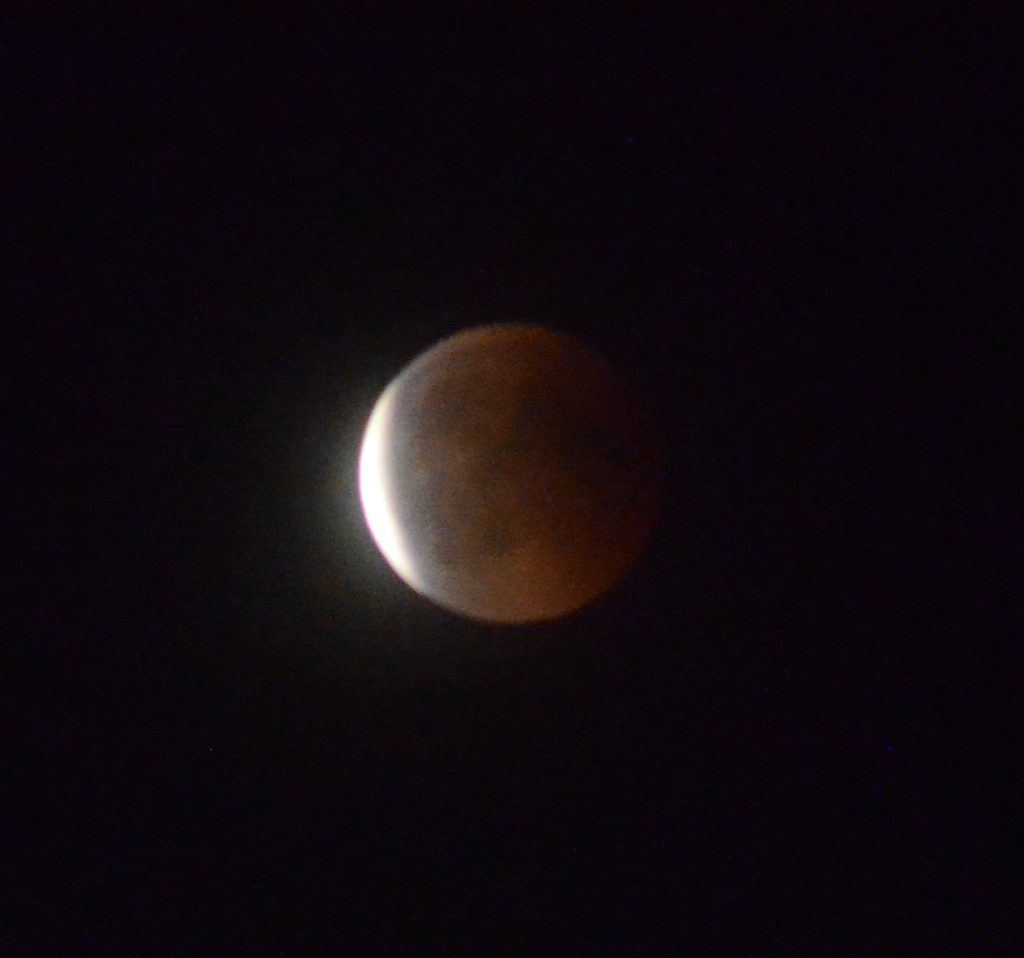 Of course, without forgetting its friend Mars (take your time, it’s an animation) :

The clouds also allowed for some creepy shots, you’d wonder if Freddy Krueger was around. 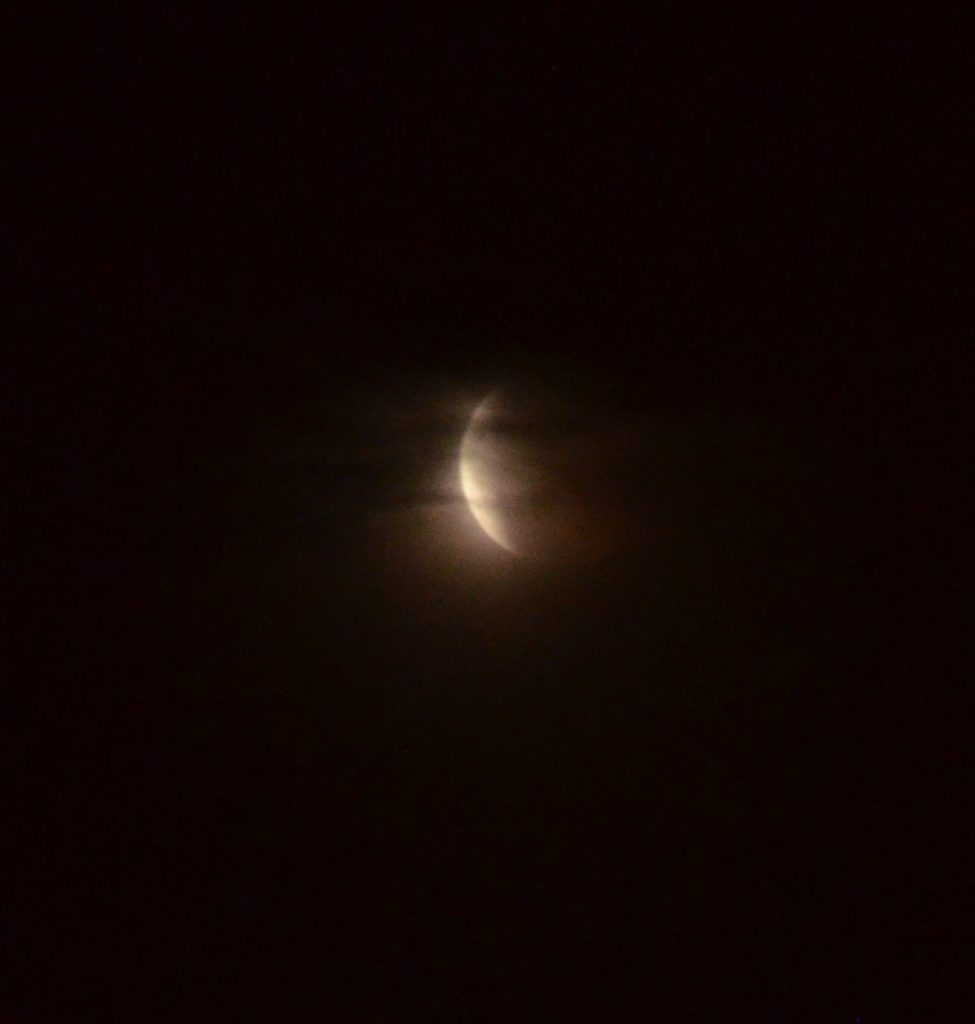 Note that these are raw photos. No filters.

The Moon
Moon Tests with a CCD Camera