Welcome to this fourth part of building Neural Networks evolved by Genetic Algorithms. If you haven’t done so yet, I would advise to read the first, second and third parts before reading this article.

So, what exactly is a Genetic Algorithm? The name applied to Computer Science sounds both scary and mysterious.

However, it is actually quite simple and refers to Darwin’s theory of evolution which can be summed up in one simple sentence: “The fittest individuals in a given environment have a better chance than other individuals of surviving and having an offspring that will survive”. Additionally, the offspring carries a mutated crossover version of the genes of the parents.

Given this general definition, the transposition to Computer Science is the following:

With this in mind, the choice in part 3 to store our neural networks in simple arrays comes into a new light: those arrays are the chromosomes of our individuals.

The genetic algorithm I built went through several phases already.

Here is the first phase:

Still, with this simple algorithm, there are many possible parameters:

To evaluate the impacts of these parameters, I then built an UI on top of this to observe the evolution of the population and see how the best individuals evolve. The UI is made of a simple table, sorted by “performance” (that’s to say the percentage of wins). Every row shows one individual, its ranking, its age (since a single individual can survive for multiple generations), its original parent, and the number of total mutated generations it comes from.

Later, I also added at the bottom of the screen the progression of the score of the best individuals.

Here is a simple screenshot: 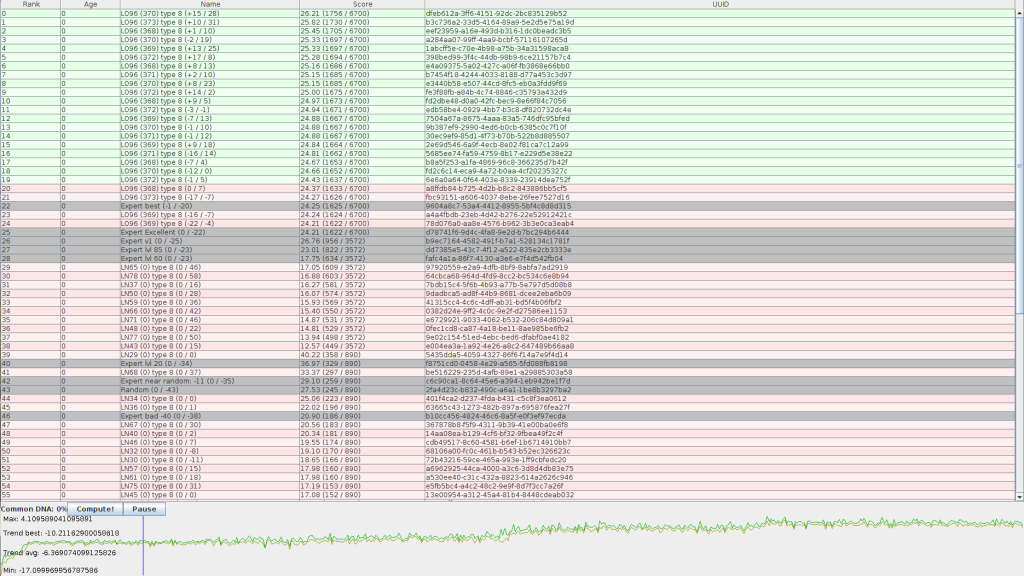